Recently, I was presented with the opportunity to design an installation for a very elite conference room and office space.  Due to the quality and impressive mediums we can provide, I knew this office art installation would be a success. The CEO requested one thing: that the installation be powerful. With confidence, I responded, “Power I will deliver.”  After communicating with and getting a feel for the aesthetic preference of the customers, we determined that abstract forms of calm, tranquil water in a peaceful state, framed and mounted to HD Glass, would be best. 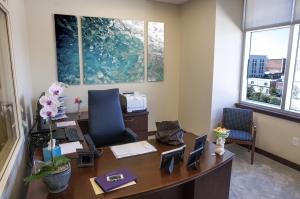 Why?… First, because HD Glass, with its vibrant, silver-infused pigment is the most premium way to display still imagery in the world today.  If you want your piece to deliver the highest level of impact, you choose HD Glass.  Secondly, tranquil, calming water will elevate moods and increase attention in an environment that can and will be intense.  I explained that only water can effectively change the cognitive state of a person to a positive one in a board room, and after my visual proposal showing the pieces of interest digitally installed on the wall, the CEO agreed with my vision. Two weeks later, the 2 ton pallet was delivered and I personally installed the work to the spaces.  Upon completion, the CEO shook my hand, looked me in the eye, and said, “These installations are amazing.  Power you delivered, Sean.  Bravo.”

What does the evidence say?

The evidence is in and when it comes to healing nature rules.  Since Roger Ulrich’s 1984 study, ‘View through a window may influence recovery from surgery,’ hundreds of similar studies have concluded with similar findings, that we as humans have an innate disposition to see nature and when we do our physiological condition improves.  This conclusion is the bedrock to the approach hospital administration, architects, and interior designers have come to known as Evidence Based Design (EBD).

Since 1984 thousands of subsequent EBD studies have been conducted.   Many of which have focused exclusively on the role art plays in the healing process.  For example, we know from a study conducted in Sweden by Ulrich that having a patient simply look at a picture of a landscape has the effect of:

Installing art derived from nature not only enhances the patient experience but improves staff and visitor comfort as well.  For instance a 2007 post-occupancy evaluation of the art program at MD Anderson Cancer Center, Houston found that Art:

– affected the perception of the quality of care at a hospital

– acted as a de-stressor for staff

– had an impact on the branding of the hospital,

– served as a point of focus and discussion for visitors

– add to the overall appeal of the visual environment

Artwork is often the most visible and noticeable aspect of the visual environment.  Its potential impact on patients, staff, and visitors is immense.  Today, the evidence is unambiguous.  Art depicting the natural aesthetic is the only choice for the healthcare environment.

Experiencing nature and internalizing the sensory stimulation of those experiences is at the heart of what it means to be alive. So what to do when you can’t experience nature in its natural state? My answer is to tune into Ambient TV on my EDAsurf.com YouTube Channel.

How does it work? Your at home or at your desk at work and would like some natural background stimulus to complement whatever monotonous task you might find yourself in. To break the monotony you tune to my YouTube Channel EDAsurf1 where you will find a variety of natural stimulus. Swim with sharks and sea turtles. Watch the sunrise over the Atlantic Ocean then set over a saltwater lagoon. Feel the cool breeze of a summer rain as water droplets cascade over ripening apples. Best of all these episodes are delivered to you in HD video and audio. In a matter of moments you will go from counting down the minutes left on the clock to feeling the essence of nature.

As I travel to different locations and gather new content for EDAsurf.com I will be uploading new Ambient TV episodes. I am very interested to know your thoughts on this sensory concept and invite you to send me your comments and feedback to my many social media link points (listed below). Thank you for following my work and happy viewing.