Аренда яхты в Турции gulet boat beaches in Turkey Turkey yacht brokerage Yacht Agency Turkey bodrum Dolce Mare
All Pieces Handmade & Signed in the EDA Surf Art Studio || WATER Your Walls NOW
After ten years watering the walls and spreading the virtues of doing so, I have been to many events and festivals to spread my message. However, it is only the Lighthouse Beer and Wine Festival that I come back to year after year and for two reasons – because it is amazing and awesome! Before I started EDA Surf in 2005, I attended this festival as a college senior in my early 20’s.Then my cup ran full of North Carolina culture, fellowship, and charm with a hint of inebriation. 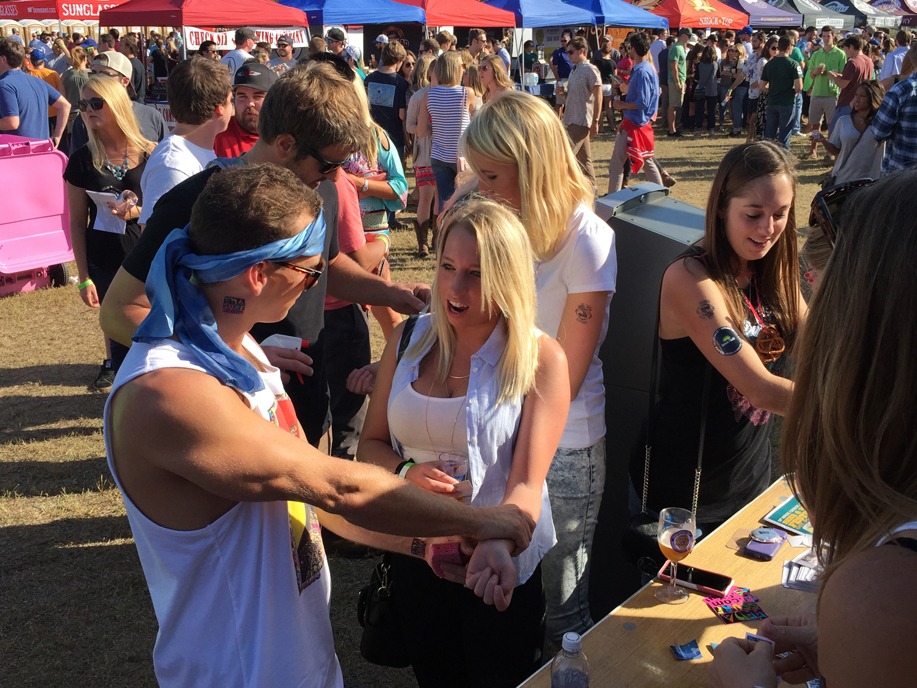 Now more than a decade later and seven Lighthouse Beer and Wine Festivals under the EDA Surf tent complete, I can say hands-down the 2015 Festival that occurred last Saturday was the best.  Over 75 of the nations best craft brew makers and top wineries descended on the banks of the sunny and warm Cape Fear River to share their individual stories, trades, and techniques with the good people of Wilmington, North Carolina.  Like most of these unique brands, EDA Surf was looking to stand out and make sure our message of water as a conceptual power was delivered loud and clear.  To do this I called in ten of my most enthusiastic, water-crazed, high energy EDA Surf ambassadors and proceeded to sticker, tattoo, and talk to every festival goer in attendance.  Consequently, the outpouring of positive energy from the public was immense.  Midway through the festival, there were lines forming for EDA Surf tattoos and cup stickers.  The debut of the new limited addition EDA Surf Haile Selassie tank top went gangbusters and was close to selling out by 4 o’clock. 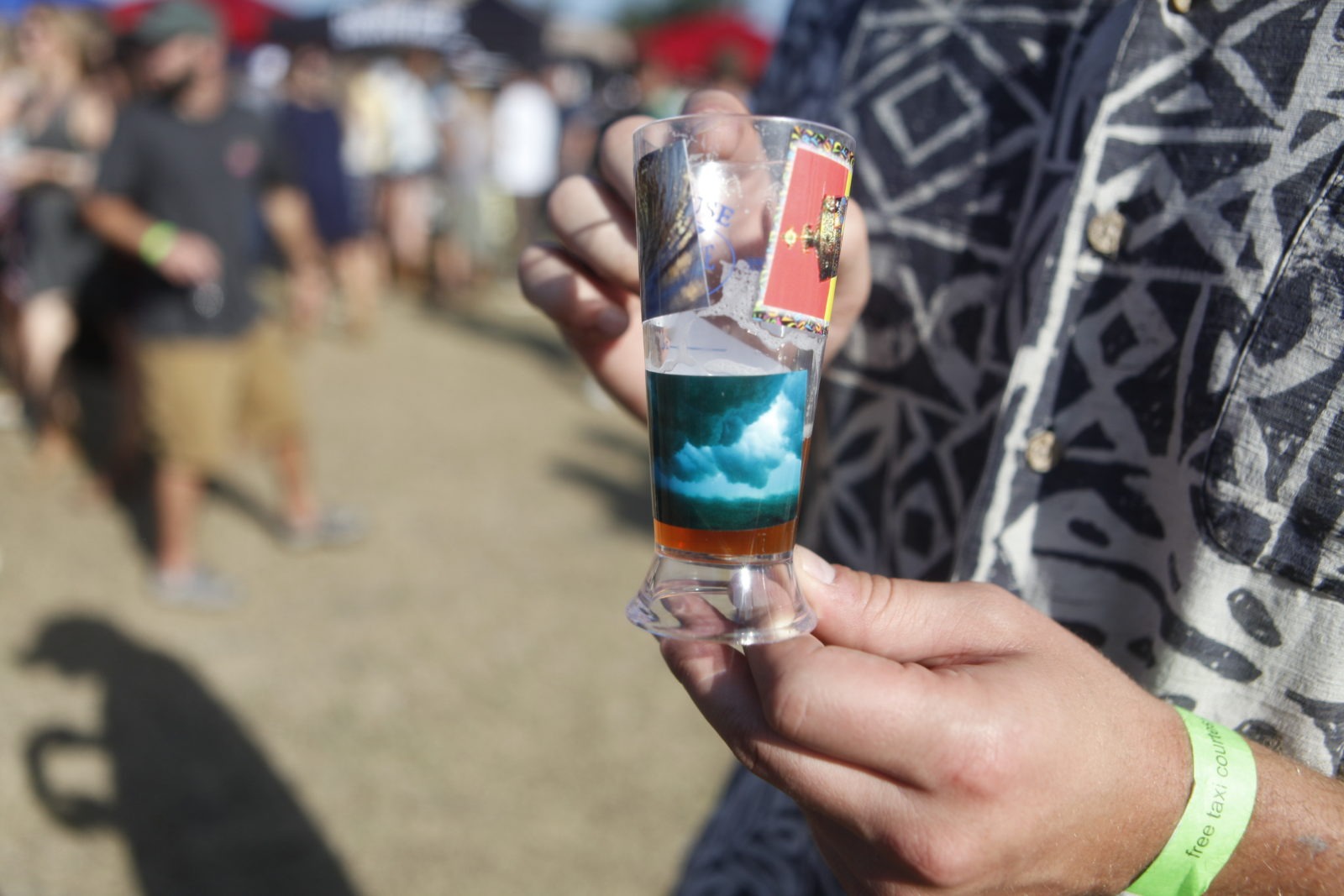 Also, new and exciting, was the debut of the EDA Surf art giveaway which was made known every thirty minutes by a smoke
machine blast followed by a bullhorn alarm and an announcement indicating the start of the giveaway. If you gave us your email address, we gave you a ticket and if you were present for the giveaway and your ticket was drawn, then you received free art. Seven pieces were given away over the course of the Festival drawing large crowds to our tent which ultimately drew greater awareness to the importance of watering the wall.
In the end, it was the value of meeting so many supportive and water-loving people that made this event such a success for the entire EDA Surf ambassador team.   If you were one of those people we had the pleasure of meeting or if you were there in spirit, EDA Surf hopes to continue the conversation and talk art with you soon.
– Sean D. Ruttkay 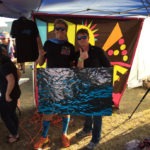 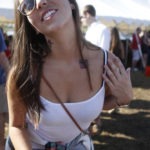 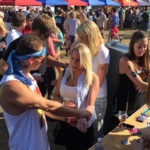 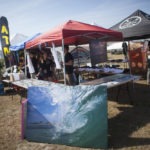 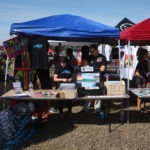 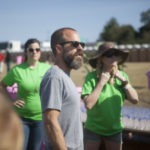 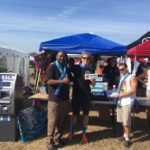 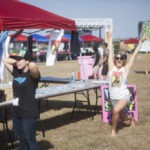 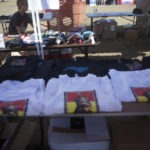 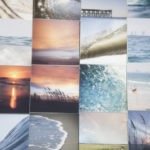 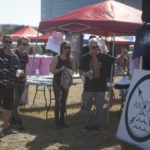 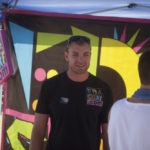 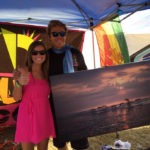 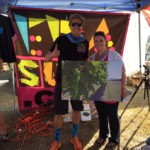 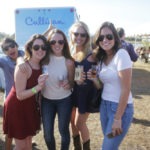 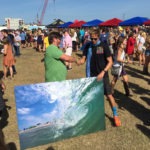 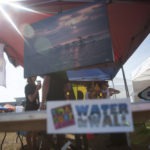 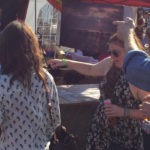 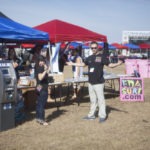 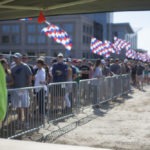 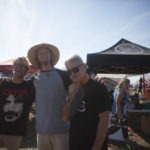 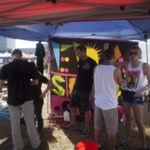 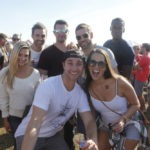 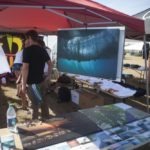 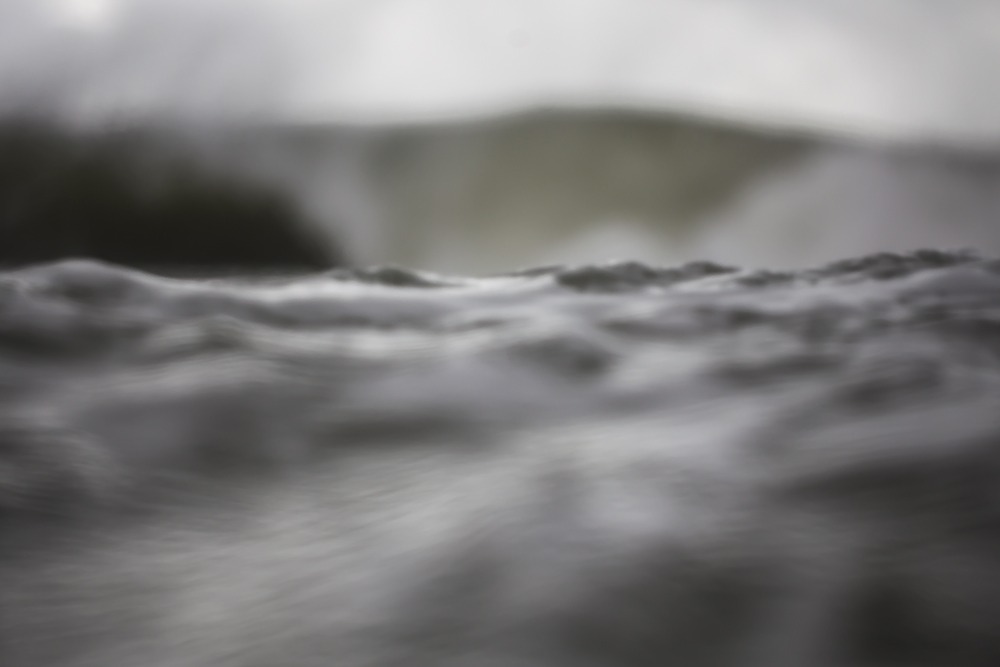 Can the energy force of the sea be extracted, transferred conceptually, and empower the human condition? I believe it can through the medium of art.  To the extent this hydraulic energy can be harnessed effectively is the job of the artist.  It is the artist job to know when to approach the chaotic oceanic environment and under what conditions.  When these earthly forces are presented, the energy is palpable in the atmosphere and the artist knows it is time to approach the ocean.

Recently, earthly forces were presented in a southerly low-pressure system that worked in conjunction with a category 4 hurricane which churned and delivered the EDA Surf region a week of excellent overhead waves and a weekend of turbulent double overhead seas.  This very rare spectacle I knew I had to take action and attempt to harness the visual hydraulic energy.  To do this I needed to view and touch this power. 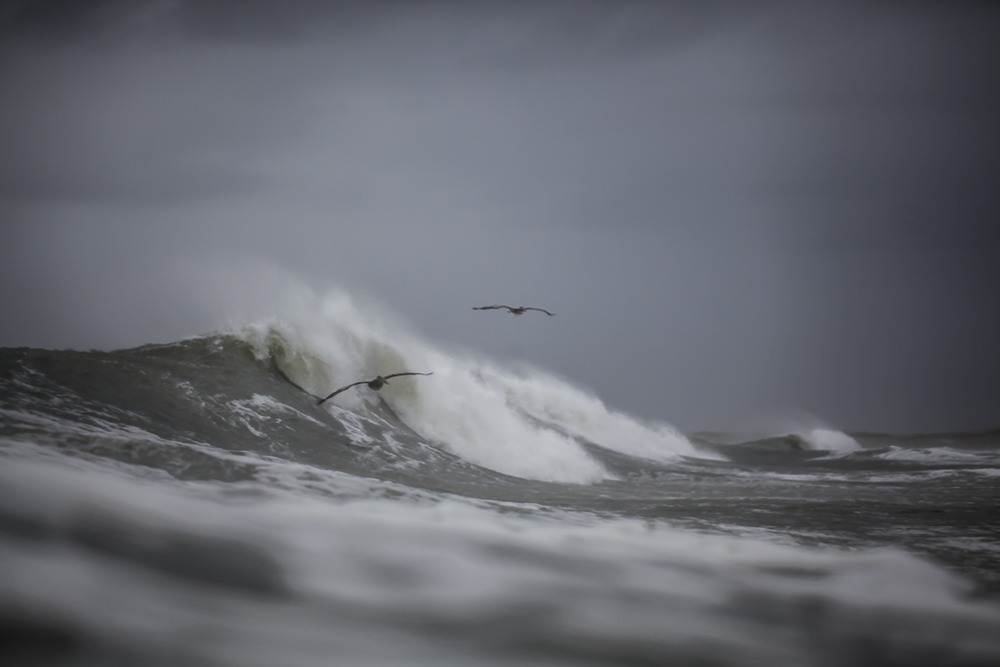 So I transported myself to a barrier island and engaged the aquatic environment.  Using an inlet jetty as a windshield from the prevailing northeasterly gale, my entry into the ocean was calm and organized.  Swimming out into the shaving cream-like foam balls was peaceful, almost blissful in contrast to the slamming set waves that I was to encounter on the outside. 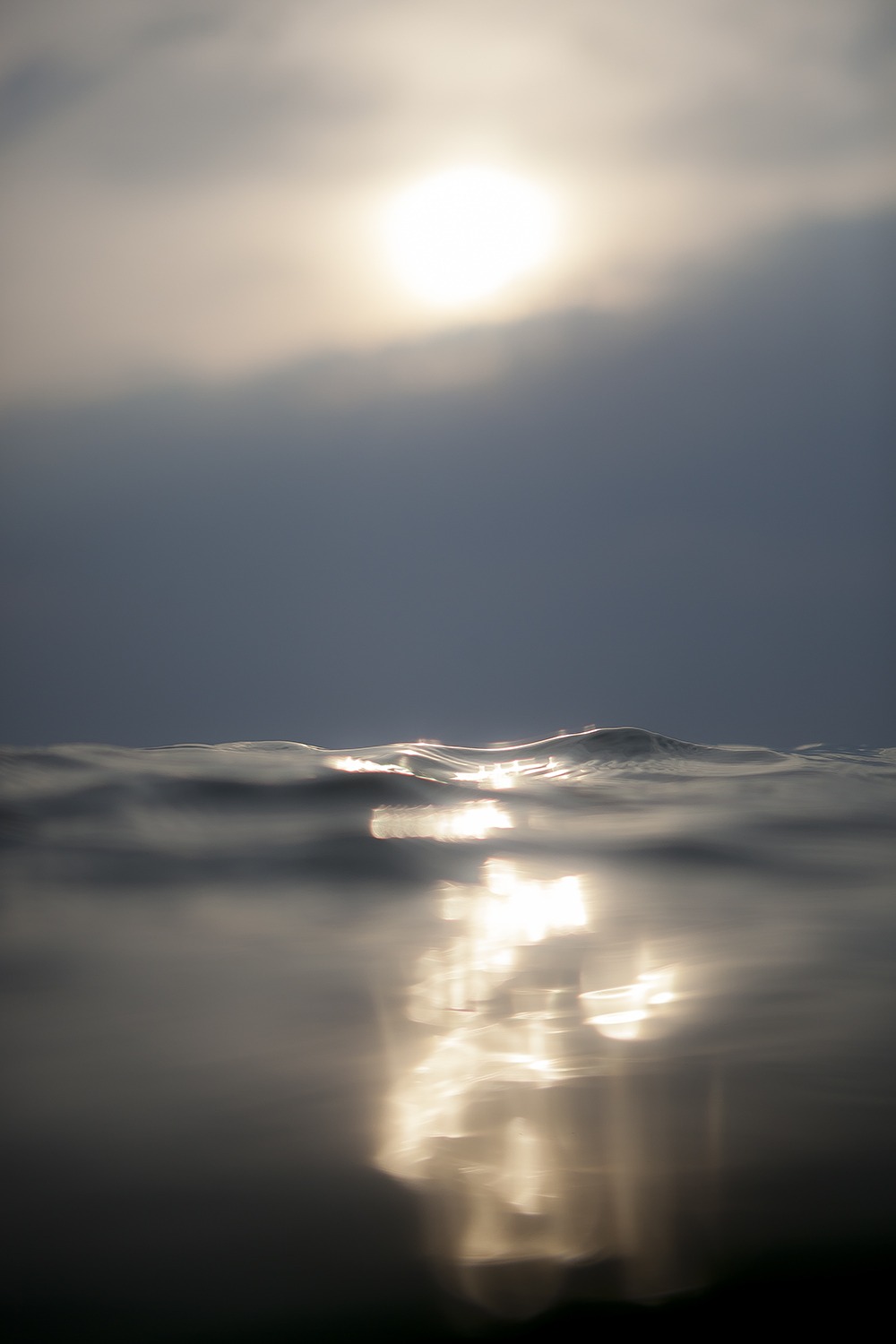 When on the outside, I was met with vexing and turbulent currents that thrashed the body intensely for moments then released in an almost a passive calm until the next swell repeated the cycle.  It was during this time between sets that a smooth calm of visual observations were witnessed.  Moments of sunlight beamed through racing black clouds.  On the surface, surfers paddled around large shifty peaks as squadrons of pelicans streamed inches above the same swell walls (as if showing the humans how it’s done).  Sea spray mixed with large tropical infused rain pellets that pierced the face as a low arching rainbow stretched across the barrier island to the west.  Eastbound, when the next set wave was sensed out the back, a large breath of salt air is gasped and a descent to the sandy bottom is taken.  Hugging the ocean floor and still with anticipation, the incoming power is sensed. Then, like a flash of violence, the body is flung topsy-turvy. 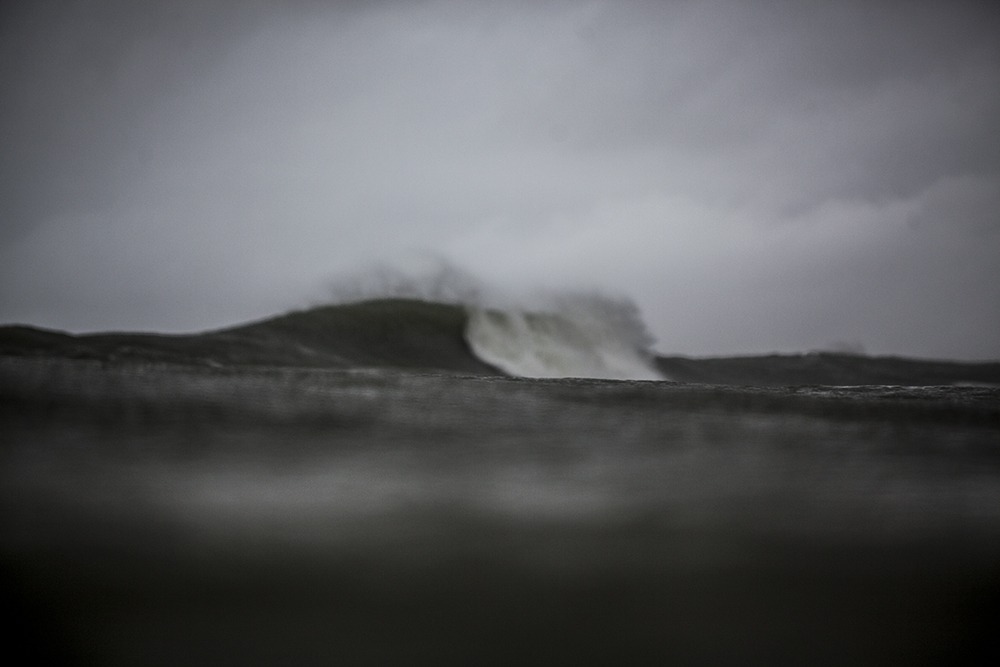 As fast as it starts it stops.  Calm is restored for a moment as ocean visuals are presented once more in another round of glorious splendor.  It will not be until later in the digital darkroom that the extent to which this power was harnessed will be known.  Till then the collection process continues.